A few years ago I scored a crap load of windows from a local glass shop for a box of timbits and a round of tripletriples.

Best $14 I ever spent at Tim Hortons!

I used them to build an Upcycled Window Greenhouse. Here’s how:

The first thing I did was start arranging the windows on the ground to see how many pairs and multiples I had to help me decide on a symmetrical greenhouse design.

It was kindof fun; sort of like a puzzle! 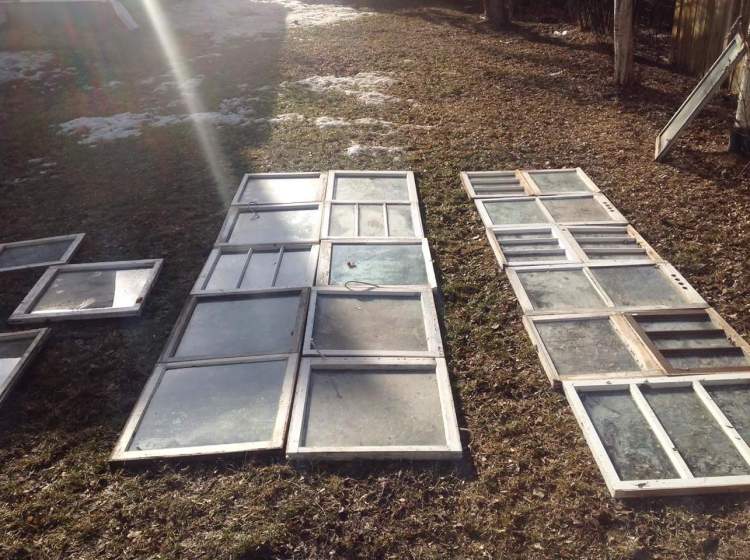 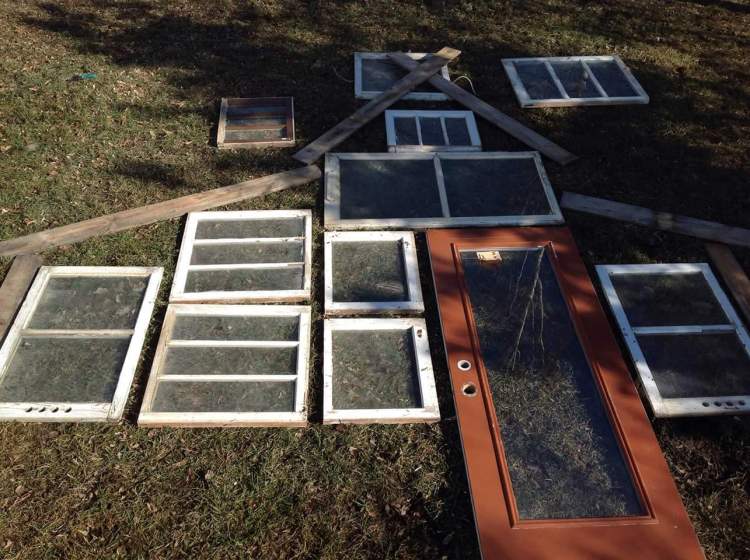 I ended up scrapping the door and replacing it with a long window I had, to reduce the height. The final design ended up being very tall anyways lol
What I did was arrange the ‘face’ of the greenhouse on the ground and began measuring and framing it out.

Once the front face was all built, I measured built a back wall to the same specs, fitting in some extra studs to hold a couple extra windows.

I had eight identical windows so I built the side walls long enough to each fit 4 windows. I placed the two side walls with the front and back walls against the fence while we dug and gravelled the plot for the skids.

Initially I didnt want the greenhouse to have a floor; I wanted to be able to till and plant directly into the ground. We decided to put the greenhouse on skids so it would be easier to level and adjust. We measured the length of the four walls and built a basic 2×4 skid frame. Then we layed plywood on top and placed it on 4 treated fenceposts laid sideways, shimmying the gravel beneath the posts until the skid was level. 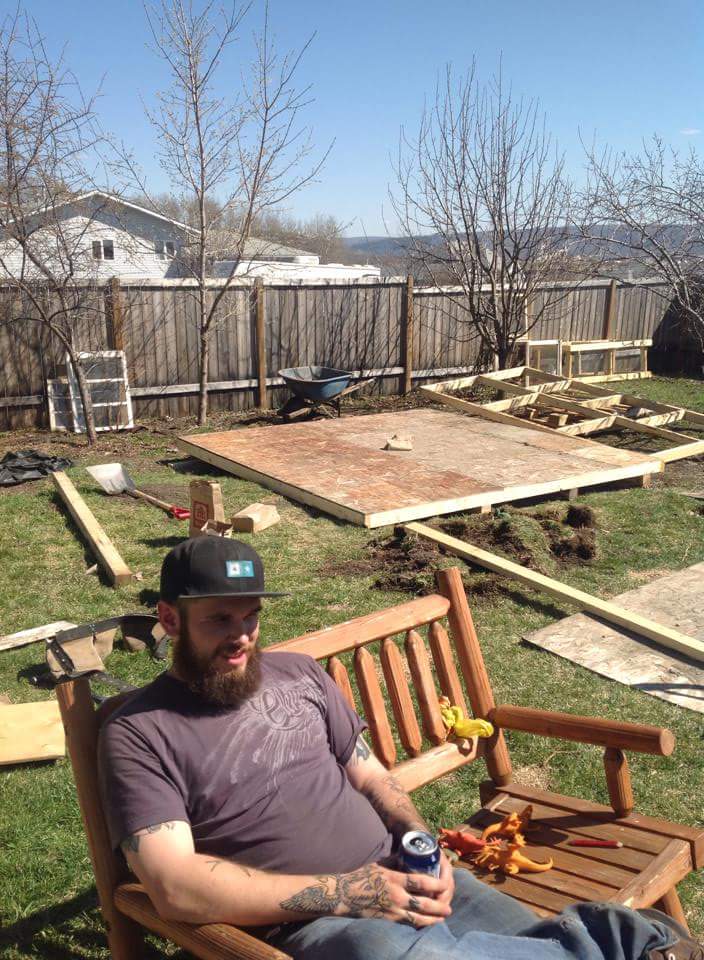 By this time Mike and I realized we couldn’t do the whole job alone so we got the help of two good friends to tackle some of the work with us and show us what we didn’t know.

Putting up the walls:

Once the four walls were up, we measured and cut 2x4s to the lengths of the walls and screwed them down as ‘caps’ atop each wall, joining together the corners.

I missed a chance to get an earlier picture before we started adding the rafters.

You can see we got cap-happy and added more capping than necessary. Something to do with confusing the pitch requirements of the higher roof. Whoops! It all worked out in the end. 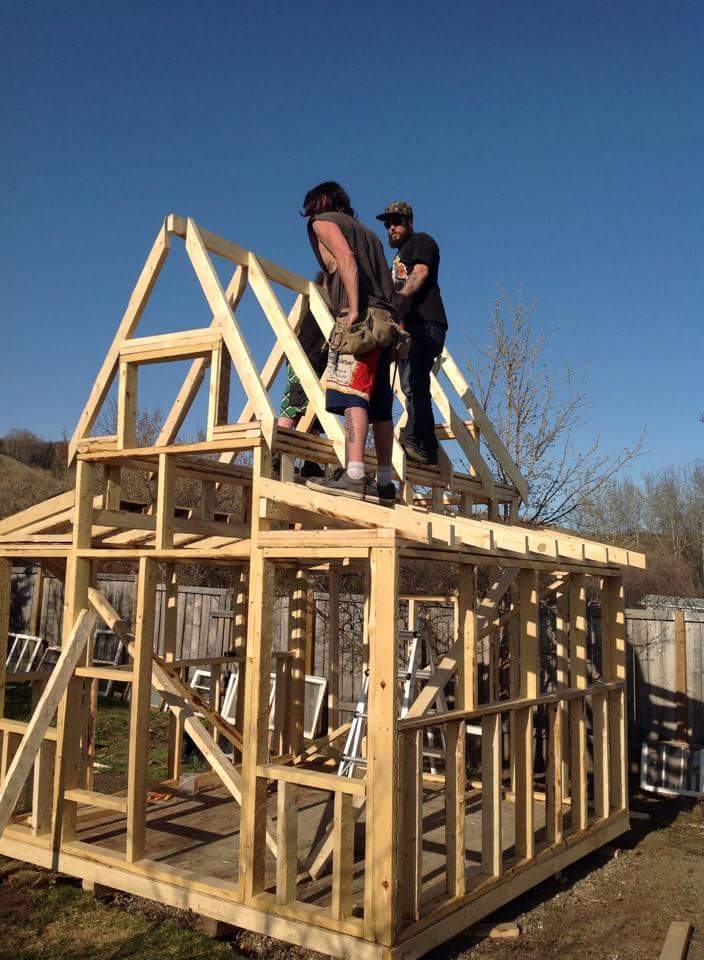 The corrugated poly roofing was the biggest expense of the greenhouse construction (although a close tie with the beer). Total cost for roof and roof screws was almost $400 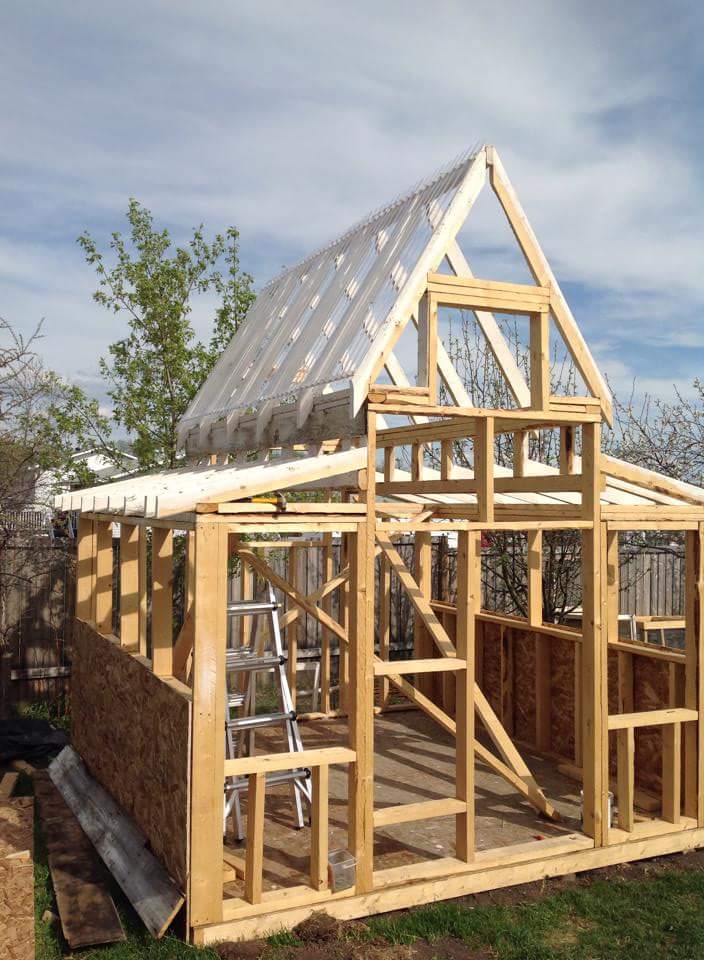 I started putting up plywood on the outside, leaving a 1/4″ overhang in each window opening. This was so that I could press the windows into place from the inside and the plywood would catch them from falling through the outside.

Then came the installation of the windows!

I screwed small strips of wood to the interior of the windows’ frames to hold the windows in place.

All along the way I was trying to get everything painted white before too many parts became too hard to reach.

The cute trim was salvaged from an abandoned house during a road trip and ended up being just enough to trim the front.

I added some window boxes to the front and continued with the mission to get everything painted white.

We added some built-in boxes inside and a shelf to hold pots and tools.

…and the greenhouse lived beside the garden and fruit trees, happily ever-after!

Pin This for Later!